Saturday was NFL Draft Day on Google Hot Trends with only two other items on anyone’s mind – a Tornado in Yazoo City Mississippi and the Country Music Marathon in Nashville (morning and early afternoon). The top twenty searches shown on Google Hot Trends included the following 18 names most of the morning – Lead by Joe Webb in the top searched spot for most of that time: 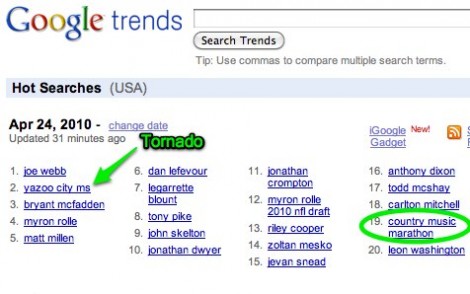 Google labels these top searches with terms like “Volcanic” “on Fire” and “Spicy” – it’s interesting that the Icelandic Volcano (Eyjafjallajokull) isn’t there and hasn’t been there, even last week when it was bigger news.

This is on a day when there is actually substantial news other than NFL football but the numbers don’t lie – we want to know who will be drafted to the Minnesota Vikings more than we want to know about Wall Street financial scandals, controversial Arizona immigration laws, non-stop icelandic volcano spewing, or what President Obama has to say (or not) on the 95th anniversary of the Armenian Genocide.

Football rules the psyche of the American male on a spring day – or at least those searching Google. Every one of the top 20 searched terms on Google were names of football players except for a natural disaster and country music.

I’ve watched Google Hot Trends for years whenever I’m curious what is on the mind of those online while I work to understand the web better. Most often, I’m startled that people are thinking about mostly celebrities, television shows, trivia, car chases, and football.

But somehow I can’t bring myself to turn my attention to working on pop culture.

One day I know we have to turn toward bigger things than entertainment and celebrity.