There is no question that the U.S. Government is getting more social media savvy. If you visit the new interactive Google Map for the 2010 census, there is a top navigation link labeled “Take Part” which leads to a Census social media page displaying links to the 2010 Census Blog, Census FaceBook Fan Page, YouTube channel, Twitter Account, Flickr page, a news room and a countdown widget – Shown below (As of March 1st there were 286 subscribers to the YouTube channel, 2,658 Twitter Followers, 11,838 Facebook Fans)

There’s even an AddThis widget on the top of the page allowing you to save or share the page with social bookmarking or social media sites. With all of this exciting engagement in social media and forward thinking use of online tools, it seems that there would be a possibility that the slightly modernizing U.S. government would figure out how to let us fill out the 2010 Census form online to drive up engagement. But it’s not to be.

There is a sidebar link in the left rail of the social media page that asks the question “Can I fill out my form online?” and while it’s great that they address it boldly and upfront like this, it’s a bit surprising that the line below reads, “No not this time. We are experimenting with internet response for the future.” (Should I say it? That’s not until 2020!) The module link leads to an “Interactive Form” which boldly proclaims from a headline “NOTE: THE FORM CAN NOT BE FILLED OUT ONLINE..” 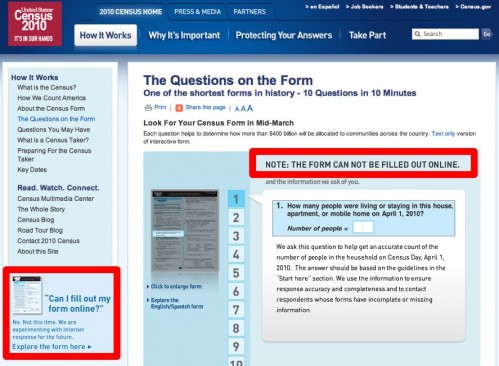 The fact that the form is viewable, with instructions and other information is a huge step forward. It’s just incredibly annoying and frustrating that everything else related to the census is online – except the form itself. Granted, there are the same hurdles to audit trails, data security, authentication and a solid form of verification of identity that stop us from moving voting online yet.

When all is said and done – it’s encouraging that we’ve come this far and gratifying that the formerly slow-moving government is taking this leap forward to social media engagement and transparency for the 2010 U.S. Census – along with many other web initiatives like this. Kudos to the Obama administration for dragging the federal government online to allow the public to interact with them via the internet.

It sure would be nice to avoid all the printed census forms, the postal delivery and then ink to paper response and return by postal delivery, with all the physical processing of those forms. Only after some portion of that paper is returned to the Census Office does it start on the path toward data entry to convert the information to digital format where it becomes useful data again.

Transcription errors, lost and misdirected mail, wrong addresses, etc., all seem so wasteful. The Census is so time and resource intensive that it boggles the mind how it could still be more reasonable to design, print, mail, transport, transcribe and store the massive amount of paper representing the data on over 300 million people.