Just took notice of the post below at the incredible “SocialNomics” blog by Erik Qualman, author of the engaging book of the same name. Clearly when social media experts like @Equalman don’t see social media on the US Census site – it’s mostly because the web designer decided that the navigation tab pointing to the Social Media page should be called something incredibly silly like “Take Part” instead of the rather obvious “Social Media”

I’m also stunned that they don’t just show the standard “Follow us” logos to Facebook, Twitter and YouTube in the some way throughout the Census site, rather than just the “Take Part” social media page. To be fair, those services are all available in the “AddThis” button at the top of the several pages.

The AddThis button only encourages visitors to bookmark via FaceBook or tweet at Twitter via the AddThis button, but that doesn’t gain followers for Census Social media accounts and also doesn’t encourage people to “Take Part” which suggests to me that they want you to help distribute the census or asks you to do something requiring volunteer time. Let’s talk user experience here.

While offline marketing activity is needed it needs to be used in a coordinated fashion with newer mediums like search, social media, mobile, etc.   Also, I???m not sure that we needed to more that double the marketing budget.  For example, why not use tools like Facebook and Twitter so that users can easily fill out the 10 minute questionnaire?

… why not prompt users to fill out the census via Facebook, Twitter, Text Messaging? There are over 100 million users on Facebook in the United States. To be fair, Mr. Grovers may already have plans to do this in the $340 million dollar marketing plan. However, the beauty is that if it isn???t currently in the plan it can easily be adjusted to accommodate such; that is one of the true beauties of online, social media and mobile. 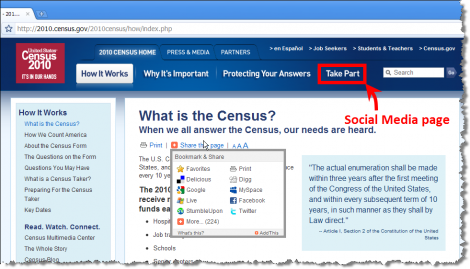 There is no question that the U.S. Government is getting more social media savvy. There is a new interactive Google Map for the 2010 census, the (hard to find) Census social media page displaying links to the 2010 Census Blog, Census FaceBook Fan Page, YouTube channel, Twitter Account, Flickr page, a news room and a countdown widget – Shown below