The tag #BAD11 stands for Blog Action Day 2011. We’ve participated in this yearly blogging event since 2008 and would like to encourage other bloggers to support this worthy cause to raise social awareness of important issues and discuss them in your blog posts.

This year, as an exercise to help me focus on food during the past couple of weeks, I’ve photographed my food (using Instagram) at restaurants, in grocery stores and at home. After each photo, I think about where that food comes from, how it was prepared, how it was grown and harvested.

The photos below are from my Instagram collection, which you can see (as a member of IG) by searching the #BAD11 tag there. For those without iPhones and instagram accounts, I present them below. 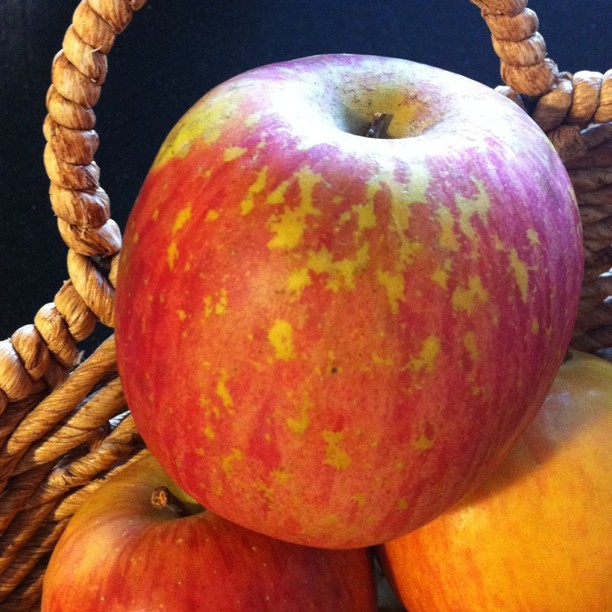 We buy these beautiful apples at the supermarket – but never think about where they are grown, who harvests them and whether the farm workers are paid adequately. 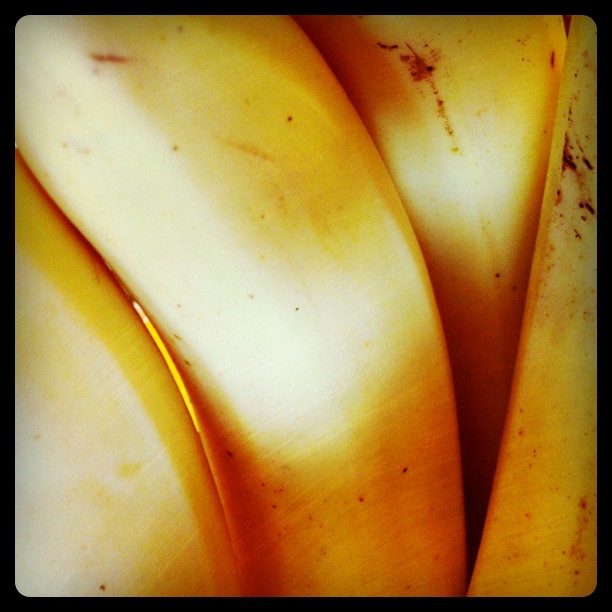 Everyone knows the term “Banana Republic” and we may vaguely recall that there is some economic taint to banana growing regions – but all we see are these pretty pieces of yellow fruit stacked neatly in the supermarket produce section. Is there still a problem in banana growing regions? Do they treat workers fairly? Are all banana farms massive corporate owned plantations? The stickers on my Chiquita bananas are labeled “Ecuador” and that is all I know about them. 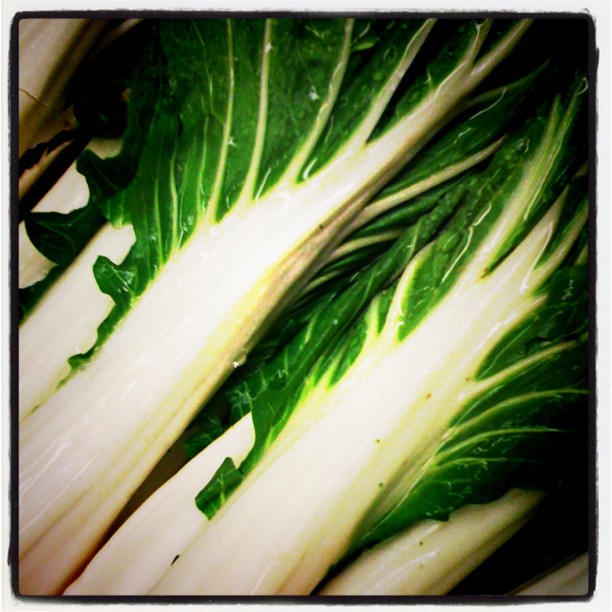 Bok Choy in the supermarket

The supermarket veggie isle is so colorful and this Bok Choy looks interesting photographically, but where does it come from? 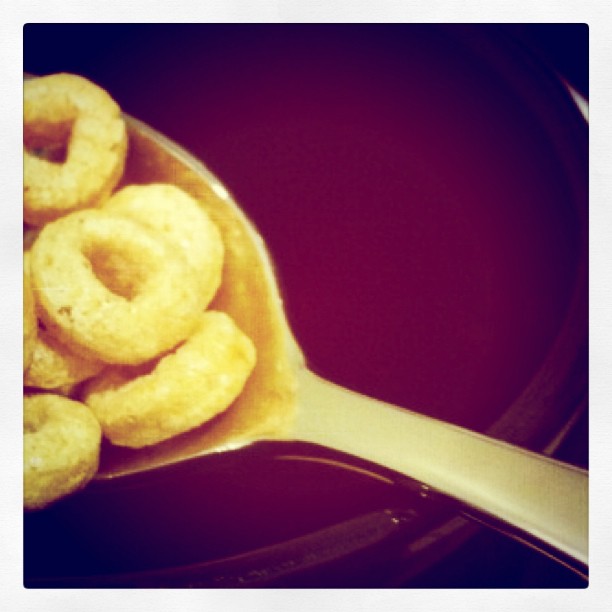 Honey Nut Cheerios in a Spoon


I shot this still life as part of an Instagram photo competition, in which one requirement was you state three reasons why they are your favorite breakfast cereal. I said they are “minimal, simple and tasty” but gave no thought to how they are made or what ingredients they include. 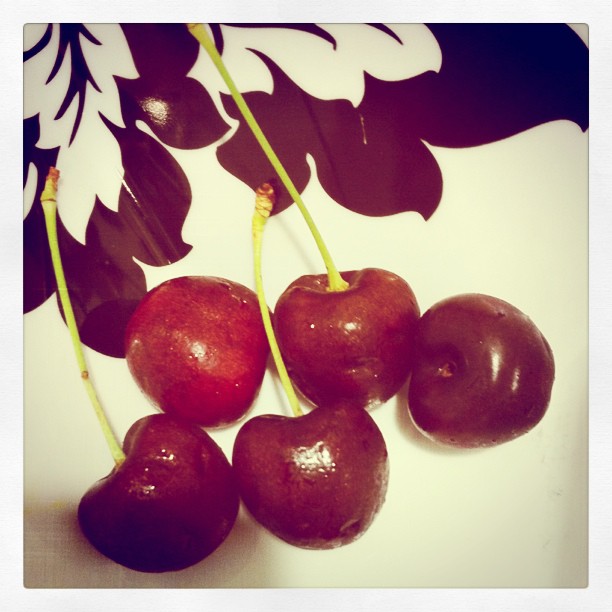 
Had these in late July near the end of the growing season locally, but we buy cherries in the winter too – sometimes I’ve eaten them in December and January and noticed the packaging is marked with “Chile” – Are South American cherries at Christmas something we should take for granted, when cherry growing season is so limited? Amazed that this easily perishable item is shipped from half-way around the globe and arrives in edible condition in my supermarket. 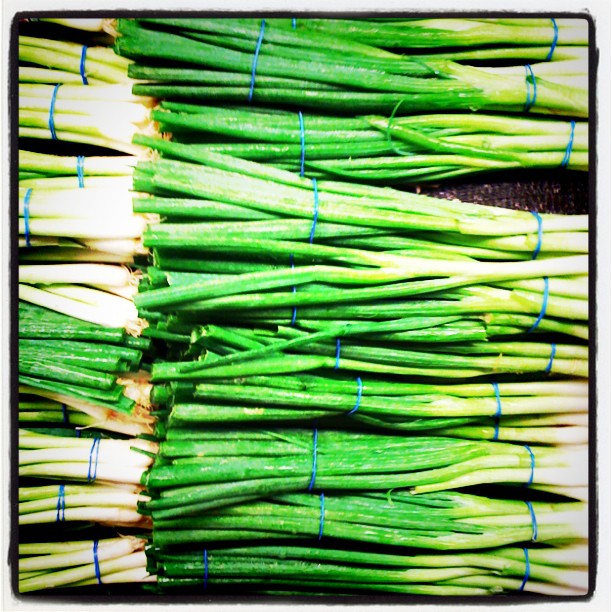 Green Onions Stacked in the Supermarket

These green onions were plentiful and on sale – but were they grown locally, are they organic, and do they taste as good as they look? 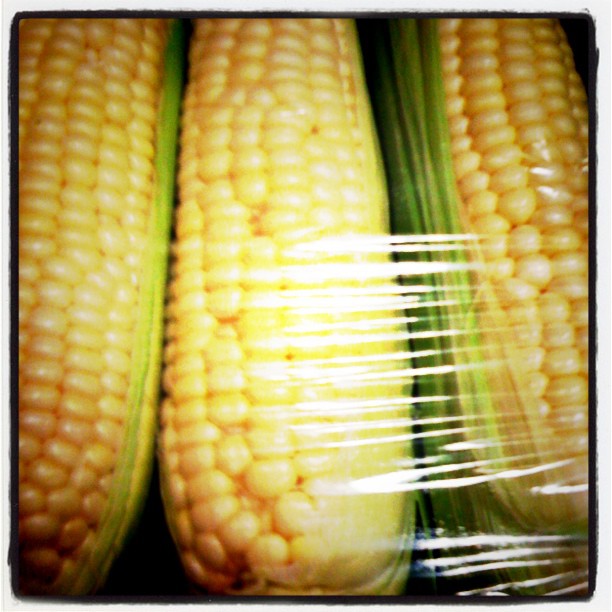 Packaged Wrapped Corn in the Supermarket

Nature provides her own package for corn and wraps it in corn silk, but we feel the need to put uniformly sized ears in styrofoam trays, remove the husk so the corn is visible and then cover them with clear plastic wrap to prevent them going bad now that we’ve removed nature’s own freshness wrappers. 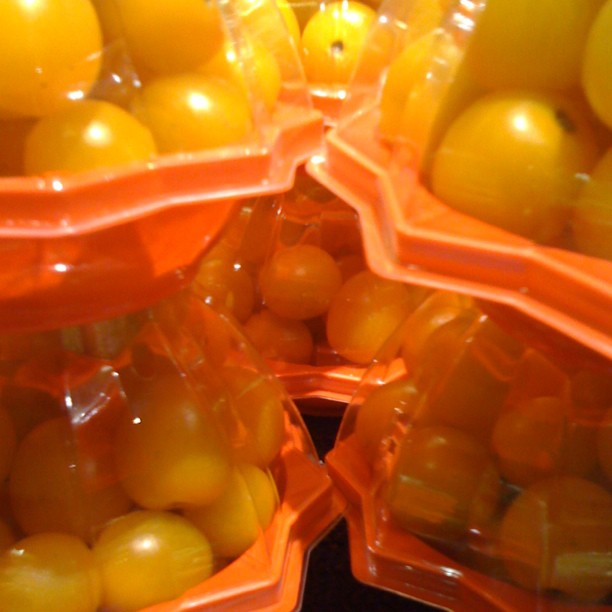 Packaged Yellow Tomatoes in the Supermarket


Stacks and stacks of pear tomatoes in plastic containers (seen here in a small Arizona border town) make me wonder how many people eat these things and why there are so many. It’s inevitable that some of these will go to waste. 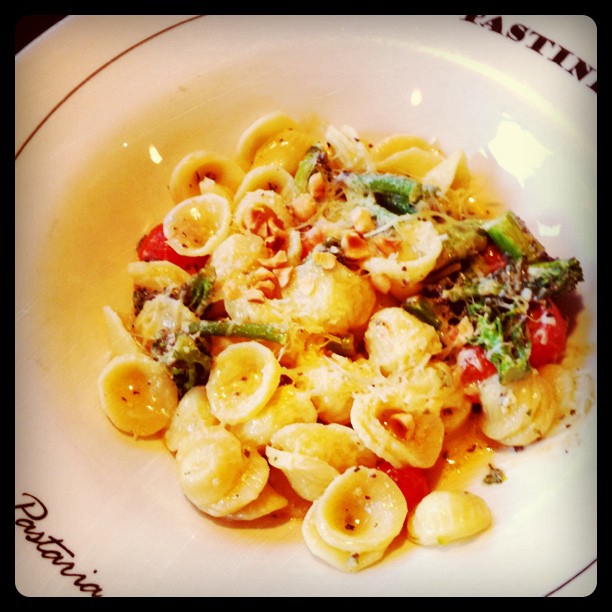 This great pasta dish was one I bought at a wonderful little restaurant. We take for granted that we can eat very well, almost anywhere. Pastini Pastaria, in Corvalis, Oregon is proof of that. (Click the photo or the restaurant name for the Foursquare link and map) 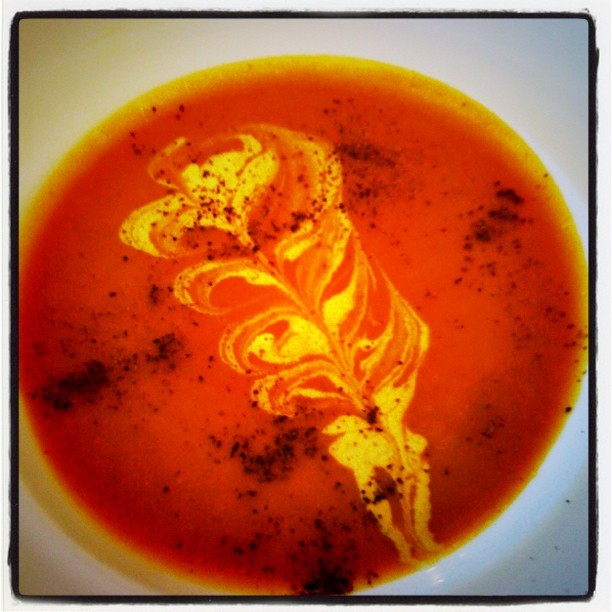 Soup Art Sonoma at "The Girl & the Fig" Restaurant


We eat incredibly well when we are willing to pay a bit extra for the privilege, and sometimes food is taken to the level of art by the chef at some establishments. This is one of those – The Girl and The Fig Restaurant on Sonoma Square in Wine Country, California. (Click the photo or the restaurant name for the Foursquare link and map) 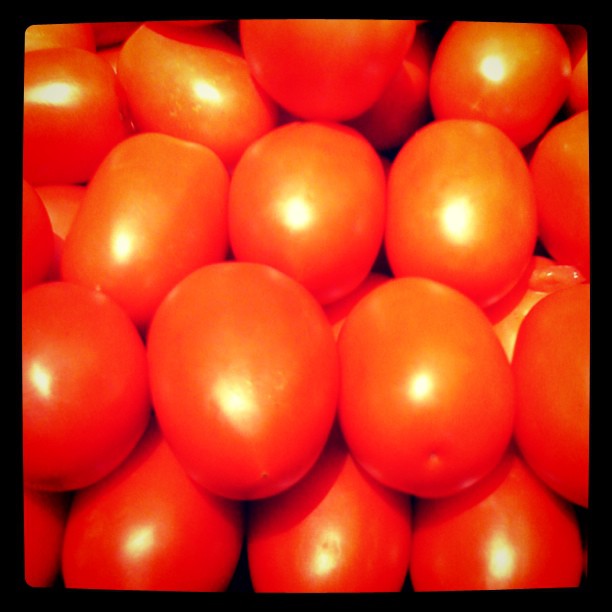 
Back in the supermarket here, stacked tomatoes – without a rotten tomato in sight – I’m sure the produce manager spends a lot of time tossing the bad stuff (Good thing I didn’t photograph the strawberries on this trip – they were all moldy). 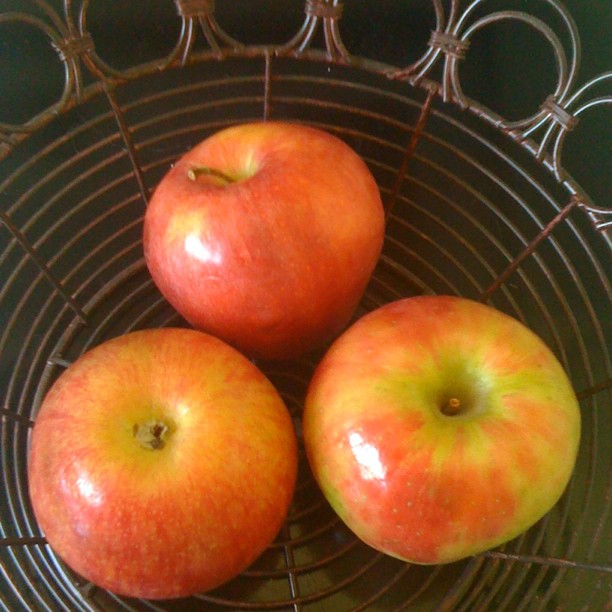 Honey Crisp Apples from the Kitchen

This year, Blog Action Day coincides with “Food & Agriculture Organization” (FAO) of the United Nations “World Food Day“. This is the 31st year of World Food Day – the theme this year is Price Fluctuation and how that can adversely affect poverty stricken farmers due to market speculation. Watch the video below for more info on FAO and the effect food price fluctuations and how planning and investment in food development can have on struggling farmers.

Lack of adequate investment in agriculture by rich and poor countries alike is the main single cause of the problems we face today. Sharp food price spikes discourage planning. If prices are likely to be higher at harvest time, farmers will plant more. But if low prices are forecast cost, they often cut their costs and plant less.

Why increase production if the cost of what you put in the ground is more than what you eventually get out? For poor families, when food prices hike, their money buys less and they might have to skip meals and go to bed hungry. Many will have no choice, but to eat cheaper and often less nutritious food.

High food prices push already vulnerable people into extreme poverty. So what causes food price volatility? A combination of issues and conditions, including insufficient grain reserves on the global market. supply is struggling to keep pace with demand and stocks are at, or near, historic lows. Fluctuating energy prices with their knock-on effect on transport and food production.

Population trends: almost 80 million new mouths to feed every year, and by 2050 , the world population is expected to exceed 9 billion.

Rapid economic growth in emerging economies: As people eat more meat, and dairy produce, the need for feed grains quickly increases. Speculators, although they may not cause price spikes, they can aggravate them. Extreme weather and climate change can decimate crops and destroy food stocks. What can be done to mitigate the impact of high and volatile food prices on poor families.

Increase investment in agriculture in a way that is targeted and comprehensive to create grain reserves, ensure that natural resources are used wisely and not used up, and boost agriculture research and development. in Senegal, Fatusa and her neighbour are reforesting the dry lands with acacia trees and have learned to extract and market the gum they produce.

Much of Ethio’s emergency assistance addresses the potential causes of high food prices by ensuring that farmers have better access to quality the seed, fertilizers, and tools, as well as technical assistance, training and credit. Mohammad sadah managed to harvest double his usual wheat crop by using improved seeds and better practices, just one year here after Pakistan’s devastating floods.

FAO supports efforts to improve rural infrastructure, such as roads, irrigation systems, storage and market facilities. Farmers in Guatemala are learning to make worm compost boxes to recycle their organic waste. This should increase May’s production and may give and a surplus to sell.

In 2010, FAO assisted governments in programming over 5 billion dollars of investment support by development banks to increase production by small holders and take advantage of higher food prices. Continued investment is crucial in the fight against hunger.

Comments on this entry are closed.