AppMakr Review: How Non-Coders Can Build iPhone Apps For Business

Many web-based services have made Application Programming Interfaces (API’s) available that allow coders to create great mashups of those amazing services to incorporate into widgets or let them build plug-ins to take a business viral. But what of those of us who know just the most basic elements of HTML and maybe a little CSS, that is those of us who think javascript looks like a foreign language?

Small business webmasters who are not programmers are often left out in the cold when cool new tools are launched that let the “programmatically inclined” easily build custom apps for their sites. But what about those of us who are more comfortable with “cut and paste” than with coding around API’s?

When it comes to programming of any sort there are many small business webmasters for whom an API is useless – so those blog posts titled “10 Great API’s You’ll Want to Use” are a waste of time to those of us who see code as a foreign language we could never hope to comprehend.

This frustration gets even worse when it comes to building tools to share your business via your own custom iPhone Application. Until recently, not only do you need to be a coder to build a native iPhone App, but you also need to wend your way through the incredibly complex process of submissions to the iTunes store.

WebSite 101 wanted to share our useful articles with entrepreneurs on the road and watched with envy as other small business webmasters with coding ability created iPhone apps for their site users to take their site mobile.

We watched as competitors in the space launched expensive iPhone app builds to promote their small business sites and wondered how they justified spending the $5,000 to $10,000 dollar price tag to have a native iPhone application created.

We had all but given up on the idea, when AppMakr came to our attention. We watched the 43 minute video showing a mom creating an iPhone app. Problem solved! Within a week and for less than $200, we had a great native iPhone application to share our daily small business internet tutorials with entrepreneurs when they are on the road! We’d love to see that App featured in the official Apple page for Business Apps some day.

Below is a shorter 20 minute video walkthrough where the process of creating an AppMakr iPhone Application is outlined step by step.

The process of creating a great iPhone app for your business really is as easy as it sounds on their site. It’s no more complex than the following eight steps:

We found ourselves constantly going to the iTunes App Store to look for our App during the next week, anxiously searching to see if the build was approved by Apple and when we found it less than two weeks from submission date it was like party time!

There is one caveat to the above process. If you want to charge for your app, you’ll need to choose the $499 option and publish it under your own brand, using your own Apple Developer Account and the iPhone SDK (Software Developers Kit). For most small business webmasters, it is likely that you’ll be $199 option and publishing under the PointAbout brand and monetizing via AdSense for mobile.

Either way, you will have a custom iPhone app for your business with the entire build process done in less than an hour and for under $500, and when compared to the costs of development of custom apps, that’s incredible.

A cool note on the default AppMakr build is that If you have embedded YouTube videos in your blog, those will play in the app, your articles can be read inside the app or visitors can choose to bounce out of the app and to the web via the iPhone Safari browser. Another of the coolest default tools built into your app is the ability to share any of your blog posts or feeds via Twitter and email. If you choose to share a post with Twitter, the app connects to Twitter via one of those API’s I mentioned earlier (you don’t need to mess with it – AppMakr does this part by default). So users can log-in to Twitter and share a post via your iPhone app! – Here are a couple of Screenshots of that cool functionality via the WebSite101 iPhone App. 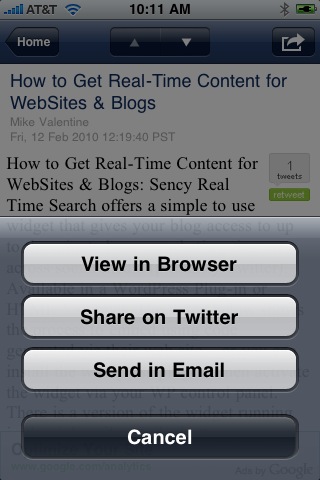 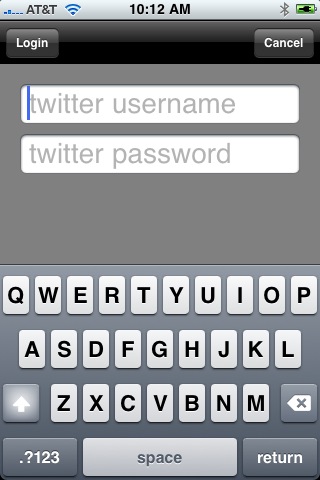 The email functionality built in to the default AppMakr iPhone App build allows your users to email your content via your iPhone app to share your iPhone App content with anyone. Once again, they are using the MobileMe functionality built-in to your iPhone via an API provided to Apple Developers. And once again, you don’t need to know anything about how the code is written, the API or SDK work – or pay extra to have it included. 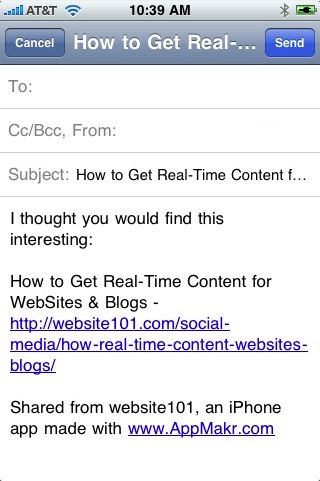 The AppMakr team has thought through this process from beginning to end and have made the process dead-simple for us coding dummies. If your business can’t afford a powerful viral tool like this for an hour of time invested and less than $200 – it’s not a real business. You need to do this for your content or publishing business. Even if you only have a business blog that talks about your industry or products, NOT providing an iPhone app for your business users would be foolish when they are this easy and this cheap to build.